In the single Tau[P301L] transgenic mice, hTAU is expressed under control of the mouse Thy-1 promoter. The observed tau conformational change and age-dependent accumulation of AT8 and AT100 reactive insoluble tau have been proposed to trigger age-dependent tangle pathology in the brain stem, starting at age 7-8 months (figure 1). In parallel, and with a strong correlation in time, the Tau[P301L] mice develop motor deficits like limb clasping and reduced survival, i.e. succumbing before the age of 12 months.

In other behavioral test, like the beam walk, we also observe a progressive motor phenotype with age in the Tau[P301L] mice. The latency strongly increases with age in these mice compared to wild type FVB/N mice (figure 2).

In these Tau[P301L] mice, we have already proven that Tau levels can be reduced after a chronic treatment of anti-tau specific antibodies. Figure 3 shows a significant reduction of hyperphosphorylated Tau in the STH/ZI and LAT/IntA/P areas of the brain after anti-tau mAb treatment from 3 to 9 months. This chronic treatment also reduces the motoric deficit, reflected by a reduction in clasping phenotype.

Figure 1: AT8 (phospho S202/T205) and AT100 (phospho S212/T214) reactive cells in the midbrain of single transgenic Tau[P301L] mice. Tangle pathology shows a strong correlation with clasping phenotype. Quantification data is available on request. 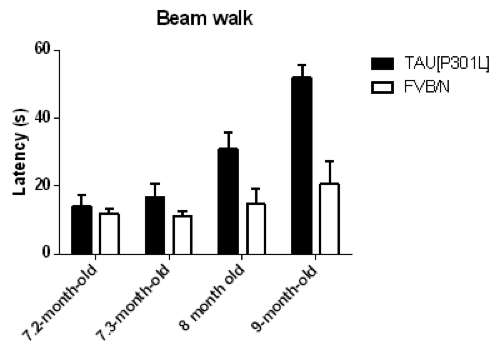 Figure 2: The latency to walk a beam over a distance of 1 meter strongly increases with age in single transgenic Tau[P301L] mice. 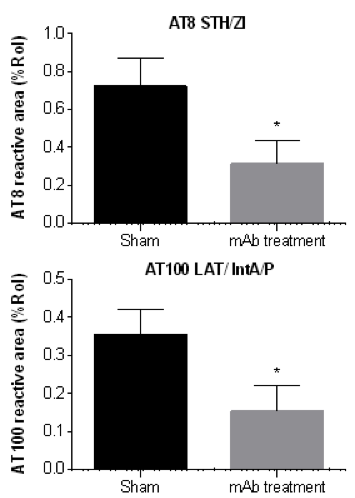 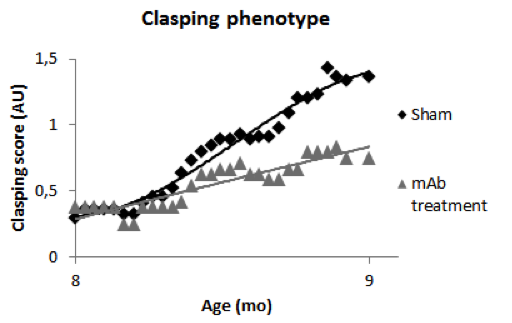 BMS showed, in collaboration with reMYND, dose-dependent effects of sub-chronic donepezil on brain Aβ and cognition in APP[V717I]xPS1 mice. This study showed a significant improvement in reference memory in APPxPS1 mice along with a dose-dependent reduction in brain Aβ (figure 2). These results suggest that donepezil may alleviate cognitive impairments in Alzheimer’s disease, in part, by reducing brain Aβ. 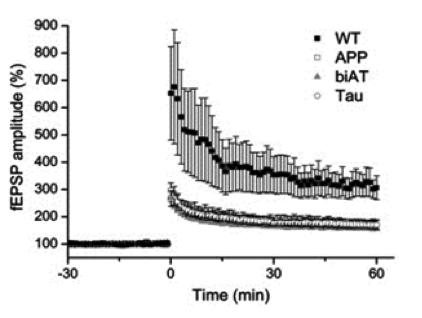 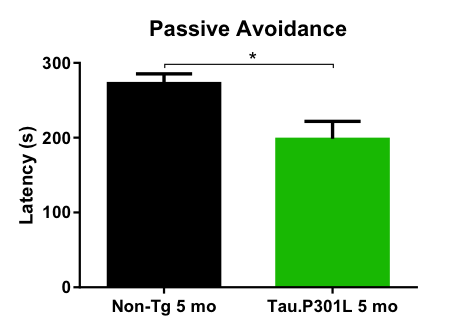 The role of microglia and astrocytes in Alzheimer’s disease and how these contribute to neuronal loss has gained increased interest over the past years. Progressive astrocytosis and microgliosis have now been found in reMYND’s transgenic hTauP301L model as well (Figure 6).

The hTauP301L transgenic mouse model displays a robust motoric phenotype correlating with an age dependent increase in hyperphosphorylated Tau and the formation of neurofibrillary tangles.  Anti-CD68 and anti-GFAP immunohistological staining show a significant 3 to 4-fold increase in the CD68 and GFAP reactive area in aged hTauP301L mice (Figure 6), which is indicative for microgliosis and astrocytosis (Walker and Lue, 2015, Ben Haim et al., 2015).

Figure 8: Correlation of astrocytosis and microgliosis with neurofibrillary tangle pathology. The % reactive area for AT100 (pThr212 and pSer214) is plotted against the relative reactive area for GFAP (left) and CD68 (right). R square is 0.5798 and 0.6986 for GFAP and CD68, respectively. 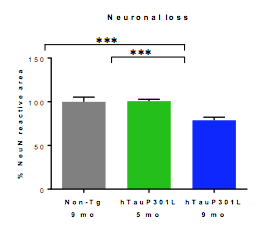 In comparison to the 5 months old hTauP301L mice and wild type controls, the aged hTauP301L mice show a prominent neurofibrillary tangle pathology (Figure 10, AT8 and AT100) indicating that the Tau pathology is steered by transgenic expression of human TauP301L drives neuronal loss

A proprietary data package on the Tau[P301L] model can be obtained upon request. Hereto, and for all other inquiries please contact the CRO team: cro[@]remynd.com